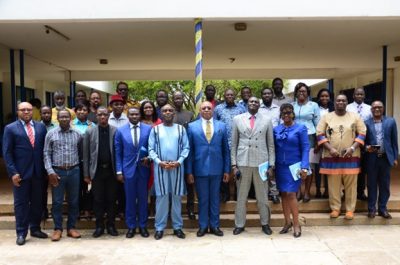 On Tuesday, 16th August, 2022, the Secretary General (SG) of the Maritime Organization of West and Central Africa (MOWCA), Dr. Paul Adalikwu paid a working visit to the Regional Maritime University (RMU). The visit was in fulfillment of a promises he made during the 16th Congregation of the University where he pledged his total support towards the good course of the University.

In an opening remark, the Acting Vice Chancellor, Dr. Jethro Brooks Jnr. expressed appreciation to the Secretary General for the honorary visit. He broadened on some challenges the University has surmounted during his tenure of office and applauded Management team and RMU staff for their unflinching support in achieving this height.

The Ag. VC highlighted some standards the University upholds thus, making RMU the only Maritime Institution in Africa that does not compromise on any aspect of Standard Training Certification and Watchkeeping for Officers and ratings (Manila Convention). He appealed to the high office of the Secretary General for a budgetary support in form of financial aid towards the smooth running of the University.

In his response, the Secretary General, Dr. Paul Adalikwu articulated some projections of the organization towards member countries and to a larger extent, Maritime Institutions out of which the Regional Maritime University will be a beneficiary. He revealed some measures his office in collaboration with the other 25-member countries of the organization will employ to achieve the objectives of MOWCA. According to him, the transformation of the Organization is geared towards the goal of attracting funds to cater for the operational cost of its member countries.  He assured the University of the establishment of a financial framework, which will serve as a reserve for member countries to draw resources at a very low rate for the development of their maritime sector

In light of this, he announced that the requirements for the operationalization of the bank, thus the Regional Maritime Development Bank, which has received the needed quota to start operation soon. Dr. Adalikwu pledged his support to ensure that RMU attracts partnership and faculty support from Maritime Institutions like the World Maritime University, Malmo among others.

The gathering also offered some heads of departments and Units the opportunity to interact and alley some challenges they are facing. Whilst commending the staff of the University for their continuous support to the development of the University, Dr. Paul Adalikwu took the opportunity to encourage staff to support Management in any way possible. He continued that, to achieve the production of qualified Maritime Professionals to man modern ships and administer Port in the region, more will be required of the University and its facilitators. According to the Secretary General, the best exposure and capacity building for any University, highly depend on enhancing the professional abilities of its human resources. He championed the course of an exchange programmes among Maritime Institution of the Organization.

The visit was climaxed with a tour of the various facilities of the university led by the Acting Vice Chancellor of the University..