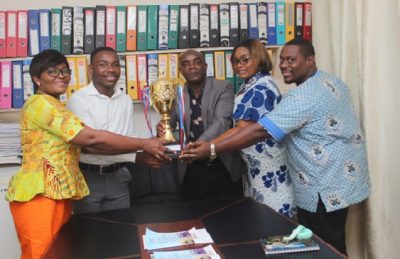 On the 18th of April, 2022 RMU Students’ Soccer Team participated in a Football Tournament and came out the winners, with a Trophy.

The Soccer Team, represented by the SRC President, Mr. Abayatei, presented the Trophy to the University through the Ag. Vice Chancellor,  Dr. Jethro W. Brooks Jr.

Members of staff who took part during the presentation ceremony were the Co-ordinator of Students Affairs, Mr. Buphy Duncan, the Public Relations Officer, Ms. Sika Attipoe and the Marketing Officer,  Mrs. Evelyn Quartey.

The event was preceded by an invitation to RMU Students Representative Council (SRC) by the SRC of Datalink Institute of Business and Technology.

RMU team played their first match against the host, Datalink University,  and won by one (1) goal to nil.   The second match with Methodist University ended with scores of two (2) goals to one in favour of RMU.

At the end of the Tournament RMU Team came out as the winners with seven (7) points and two (2) goals, and was awarded with a golden trophy.

The excellent training of the Team before the Tournament by RMU Sports Committee, had indeed paid off.