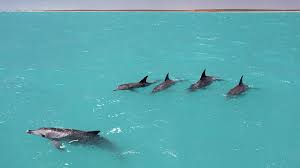 The Vice Chancellor (VC) of the Regional Maritime University (RMU) Professor Elvis Nyarko, has called on Government and the private sector to invest in the establishment of more marine research facilities to monitor and protect marine life. According to the VC, the recent incident whereby a lot of dead dolphins and fishes were washed ashore, presents a unique opportunity for the nation to build capacity for regular monitoring of our water bodies, adding that, frequent monitoring of our coastal waters, for instance, to observe marine activities could help pick up early warning signals of such infortune events. Prof. Nyarko, who has over 25 years’ experience in marine environmental science research, made this statement when contributing to GTV “Talking Point” programme on the topic- “Mass deaths of dolphins and other fishes”. In addition to the TV interview, the VC also spoke with the Ghanaian Times Newspaper and Class FM 93.1 Morning Show.

In brief, on Sunday April 4th 2021, many of dolphins and dead fishes were washed ashore along the Coast of Axim in the Nzema East Municipality of the Western Region, Osu in the Greater Accra Region and Keta in the Volta Region and reports indicated that locals in these areas had picked some up probably for sale or personal consumption.

Contributing to discussions on this issue, the VC mentioned that the death rate of fishes as witnessed in the aforementioned coastlines were massive although the country has in the recent past witnessed such occurrences, especially in the Western Region but on a minor scale. According to him, several offshore activities such as discharge of untreated organic wastes into the ocean which could lead to reduced oxygen levels, discharge of toxic chemicals or contaminants from industrial and domestic sources into our water bodies among others could result in fatalities in fish and other aquatic species. He said the cause of death of the fishes in this recent event could be due to oxygen-depletion related stress scientifically referred to as Hypoxia.

He added that, it was worrying for the locals to pick the dead fishes and dolphins for domestic consumption as reported in the news, and any carelessness on the part of the public to consume the fishes or prepare same for the market without knowledge on the cause of death could be problematic. According to him, it is particularly worrying that such large quantities of dead fishes and other aquatic mammals have been reportedly washed ashore and if we do not reduce the rate at which we dump untreated wastes into the ocean, this event can become very frequent as the pollution tolerance threshold of the ocean becomes exceeded. He advised persons who may have consumed the fishes to visit the hospital should they experience any illness.