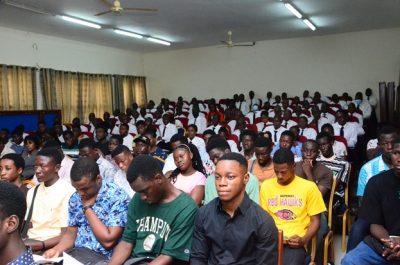 In his opening remark, the Ag. Vice Chancellor Dr. W. Jethro Brooks Jnr.  welcomed and congratulated the fresh students for their excellent academic performance in their Senior High School Examinations which has enabled them to gain admission into the University. He explained that, the ceremony affords them the opportunity to participate in the academic, cultural and social climate of the University.

Adding to earlier remarks, he championed on the observance of RMU governing rules and regulations. He emphasized that, RMU which is a high University of diplomatic repute will in the discharge of its operations, uphold the good name of the University. He charged the fresh students to refrain from conducts that would bring the name of the University into disrepute. He encouraged them to use the appropriate channels to communicate any form of grievances.

He continued to assured the students of the University’s preparedness to make use of its resources for the realization of their full potentials.

As part of the programmes scheduled for the ceremony, students were also introduced to the e-learning management system, library services, examination rules and regulations among others.