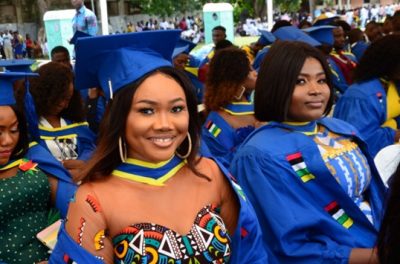 A total of four hundred and forty-two (442) graduands were awarded degrees in Masters, Bachelors and Diplomas at the 16th Congregation Ceremony of the Regional Maritime University (RMU) held on Saturday, 11th June, 2022. Out of this number, sixty-two (62) received their master’s degree, two hundred and ninety-seven (297) received bachelor’s degree and eighty-three (83) were awarded diplomas. The first batch of students who pursued the B.Sc. Accounting and B.Sc. Information Technology, newly introduced programmes, also graduated.

It is pertinent to note that, the 16th Congregation Ceremony followed the 27th Board of Governors (BOG) meeting held annually by the University. BOG Meetings marks the annual gathering of the governing bodies of the University to deliberate on issues of policy.

In his opening remarks, the Chancellor and RMU Board Chairman who is also the Minister of Transport, works and Infrastructure, Republic of the Gambia, Hon.  Ebrima Sillah, thanked Management of the University for the beautiful reception accorded him. He called on Member States to continue to support the developmental and financial sustainability of the University by paying their contributions in full.  He reiterated his full support to the infrastructural development of RMU.

Speaking at the 16th Congregation, the Acting Vice Chancellor, Dr. Jethro Brooks Jnr. thanked the out-going Chancellor of the University and Chairman of RMU Board of Governors who is also the Minister of Transport of the Republic of Cameroon, Hon. Jean Ernest Massena Ngalle Bihehe for successfully steering the affairs of the Board and the University.

He also welcomed the incoming Chancellor and Chairman of RMU Board of Governors and Minister of Transport, Works and Infrastructure of the Republic of The Gambia, Hon. Ebrima Sillah into office. He pledged his support to the Chancellor for a smooth and successful tenure of administration.

He expressed appreciation to all the Ministers of Transport of the various governing countries for their support towards the University over the years. He thanked the host Minister, Hon. Kwaku Ofori Asiamah, Minister of Transport of the Republic of Ghana and Chairman of the Maritime Organization of West and Central Africa (MOWCA), for his continues support to the cause of the University.

To the graduands, the Ag. Vice Chancellor admonished them to be resolute and ready to put to practice the skills acquired from RMU. Adding to earlier speakers, the Guest of Honour, Hon. Kweku Asiamah, Minister of Transport of the Republic of Ghana, pledged the support of his Ministry to help the University curtail the rampant encroachment of its lands.

The Minister, who is also the Chairman of the Maritime Organization of West and Central Africa (MOWCA), revealed the intent of the Organization to strengthen the Regional Academy of Maritime Science and Technology (ARSTM) in Abidjan and the Regional Maritime University (RMU) in Accra -Ghana. He called on the unwavering support of all member states to render unto the RMU its due payments.

Furthermore, the Vice-Chancellor of Shanghai Maritime University, Shi Xin, in a congratulatory letter addressed to the graduating class, expressed joy towards all the graduating students. He thanked RMU for the joint cooperation established between the two for the training of students in B.Sc. Logistics Management in the last ten years. According to the Vice-Chancellor, more than two hundred and thirty (230) students of B.Sc. Logistics Management programme have graduated and are now working in the Maritime and Shipping sectors around the world. He wished the gradaunds well and success in all their purists.

Some officials who constitute the University’s Board of Governors were awarded for their commitment and selfless service to the University during their tenure of office. The University awarded them citations in memorial of their services. Recipient of the award included the outgoing Chancellor and Minister of Transport of the Republic of Cameroon, Hon. Jean Ernest Massena Ngalle Bihehe and the outgoing Chairman of the Experts Committee, Professor Gerard Messina.

A total of twenty-two (22) awards were received by some brilliant students for their outstanding performance during their period of study.  Out of this, the best all round undergraduate student award went to Acheampong, Agabus Yeboah who also emerged as the best student for B.Sc. Nautical Science class of 2022. Acheampong, Agabus Yeboah also won the Rear Admiral David Animle Memorial Prize in Nautical Science as well as the Magnus Teye Addico Award for graduating as the overall best Maritime Studies student.

Another outstanding prize that was awarded on the day of the graduation ceremony was received by Mr. Seth Kwafo of the Regional Maritime University (RMU). He won Kasapreko’s Excellence Award for graduating as the Best Engineering Student. He received a cash prize of GH₵2000, a laptop, and a commemorative plaque. The package comes with an opportunity to undertake his National Service at the Kasapreko Company Limited. The 16th Congregation Ceremony was well attended by RMU Board members, Management Staff, representatives from the Nungua Palace, Parents and Guardians, graduating students and friends of the media.

Some images from the Graduation Ceremony