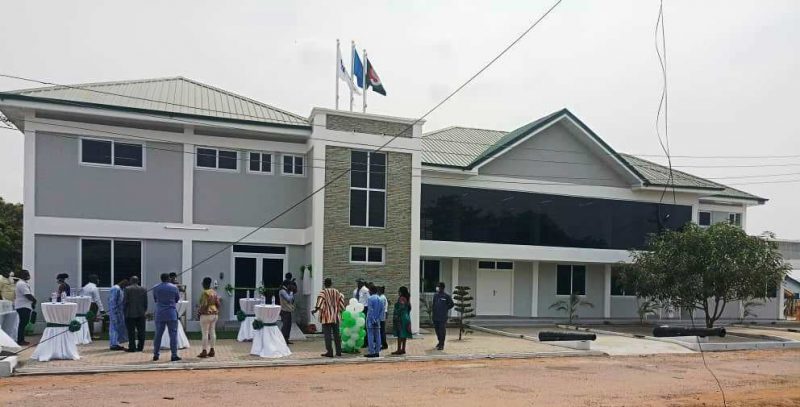 The Regional Maritime University (RMU) has marked yet another milestone in the collaboration with Bernard Schulte, BS (now Schultegroup) to provide ship Board training and job opportunities for RMU graduates. Following the signing of a memorandum of understanding (MOU) between RMU and BS in 2015, the collaboration has since chalked mutual beneficial developments including this latest commissioning of a new office complex on the campus of RMU on Friday, 14th August, 2020.

The new office complex, which cost GH¢2.1million was funded by BS. It is hoped that, the Schulte group will be able to achieve its target of crewing more of the current number of RMU graduates undergoing Shipboard training onboard their vessels. Currently, there are five hundred and fifty-five (555) RMU graduates are sailing on over 60 BS vessels across the oceans and seas of the world. The breakdown is as follows: 441 Ghanaians, 56 Nigerians, 31 Cameroonians, 21 Sierra Leoneans, 5 Gambia and 1 South African.  Moving forward, it is expected that, 43 more selected cadets from RMU would join BS vessels immediately after their graduation, once the Ghana’s borders are declared opened by the President of the Republic of Ghana, His Excellency Nana Addo Dankwah Akuffo-Addo.

Speaking at the ceremony, the Vice Chancellor of the University, Professor Elvis Nyarko, indicated that the merger of Bernard Schulte (BS) and Bernard Schulte Ship Management (BSM) necessitated an expansion of the office space which resulted in the construction of the state-of-the-art office complex. By the establishment of this local company in Ghana on RMU campus, Schulte Maritime Services will increase the selection of RMU graduates on their ships. He commended the following dignitaries for their contribution to the project: Captain Nii Addo Addo, Lecturer / Cadet Crewing Coordinator, Ing. Augustus Andy-lamptey (immediate Past Provost), Chief Engineer Alock Asamoah (Former Rector, RMU) and most significantly Madam Eva Rodriduez, whose belief and conviction in RMU trained graduates, facilitated the signing of the MOU between RMU and BS in 2015.

The VC further explained that in order to achieve the objectives of BS and RMU in crewing more than ten times the current number of RMU graduates undergoing Shipboard training onboard BS ship, RMU, has allocated an area of a little over one (1) acre to the Schulte group to construct their African Regional Office and Training Center. The project is estimated to cost at about 4 million USD dollars for which a sod cutting ceremony for that project was jointly done by the then Board Chairman / Chancellor of RMU and Minister of Transport of the Republic of Ghana, Honorable Kawku Ofori Asiamah and the CEO of the Schulte group, Mr. Ian Beveridge, in 2017. He therefore, encouraged the Schulte group to quicken their pace to commence that project.

Captain Joshua Nii Addo, representing the Schulte group, said RMU have had a very solid relationship with the Company and with the new facility, this long-standing collaboration will be further deepened.

Present at the ceremony were Management members and staff of RMU, Staff of BS, Rev. Ministers, friends of the media fraternity and some invited guests.