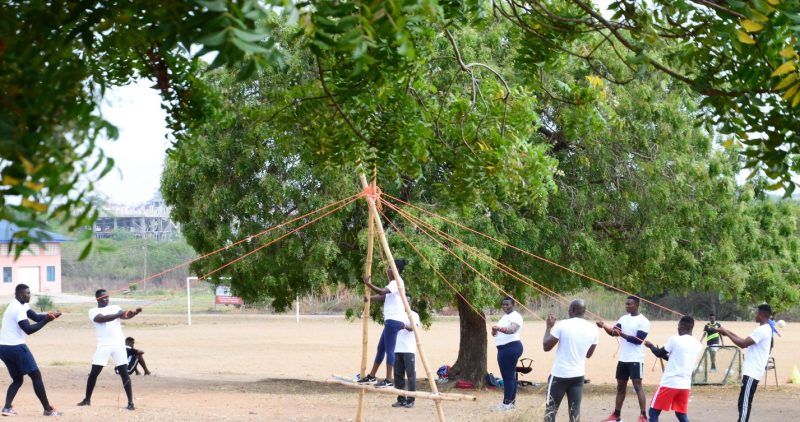 An opening ceremony was held on Wednesday, June 02, 2021, in the Auditorium of the Regional Maritime University (RMU) to mark the commencement of training for personnel of the Ghana Police Service Marine Unit (GMPU) in Maritime Affairs and Maritime Safety and Security programme.  A total of one hundred and forty-three (143) Police Officers of the Ghana Police Service (GPS), Marine Unit, were sent to the campus of RMU for a nine (9) months training. Trainers for this programme are nationals of Israel under LEEMAR Group, UK. The current crew of police officers follows an earlier batch received by the University in 2012.

Training session for some of the police officers.

In September 2012, RMU hosted the first-ever Maritime Operations Training for the Ghana Police Service, resulting in the formation of the Marine Police Unit of GPS. The objective for training the police personnel at RMU is to build the capacity of the selected officers to enable them to conduct effective patrols on water bodies against the increasing level of water-related crimes such as piracy, drug, and human trafficking, robberies and kidnappings. The proximity of the University to the sea and the Tema Harbour presents a unique opportunity for the officers to perform the activities required for the success of the training.

Speaking at the opening ceremony, the Vice Chancellor of the Regional Maritime University, Professor Elvis Nyarko, explained that for effective patrols, troops for any kind of law enforcement duties should have the complement of mechanical, electrical and first aid personnel for the safety of the vessel.   He, therefore, suggested to the Police Service to send in more officers to RMU to undertake additional training in the IMO Mandatory short courses, technical and vocational courses for the enhancement of their capacities.

He called on the Government of Ghana to support the Police Service to continue to build the capacity of the Marine Police to enable them to conduct effective patrols on Ghana’s waterways to ensure safety and development.

In his keynote address, the Guest speaker, the Inspector General of Police (IGP), Mr. James Oppong-Boanuh, commended RMU for receiving the second batch of officers on campus. According to the IGP, the GMPU forms a special component within the Ghana Police Service since its formation in the 1960’s. The GMPU formally called “Water Police”, is specifically mandated to deal with maritime crimes and sea patrols among others. According to the IGP, the training to be received at RMU is to enhance the skills of the officers.  He thanked the VC and RMU Management Staff for their continuous support towards the realization of this goal.  He implored the selected officers to make use of the University’s facilities to enrich their knowledge and skills.

We are using cookies to give you the best experience. You can find out more about which cookies we are using or switch them off in privacy settings.
AcceptPrivacy Settings